Thinking of Selling Your Property?
Achieve the maximum price in the shortest time
for the lowest fees with Auctioneera

Being a landlord can be a lucrative endeavour, particularly given the current high demand for rental accommodation in Ireland. However, landlords do bear serious legal responsibilities to ensure that the buildings that they are renting are safe and compliant with relevant regulations. This is a general guide but it is recommended to engage the services of a qualified engineer / assessor to carry out a compliance report on your building to ensure that it is compliant and if not, how to achieve compliance.

While adhering to the law is obviously motivation enough, by complying with regulations, you will be dramatically reducing the likelihood of a fire in your property and reducing the quantum of damage one would cause if one occurred. Furthermore, standard insurance policies will insist that a building is compliant in order for cover to be valid. In short, complying with the regulations help reduce the risk of fire, limits the damage that will be done if one occurs and ensures your insurance policy is valid.

Building regulations do not apply to buildings constructed prior the 1st June 1992. However, this does not mean that owners of buildings constructed pre-’92 have no responsibilities at all. On the contrary, while it would not be feasible to insist that buildings, some of which are literally hundreds of years old, are retrofitted to adhere to modern building regulations, landlords of all buildings must adhere to certain minimum requirements to ensure the safety of those living in their buildings. 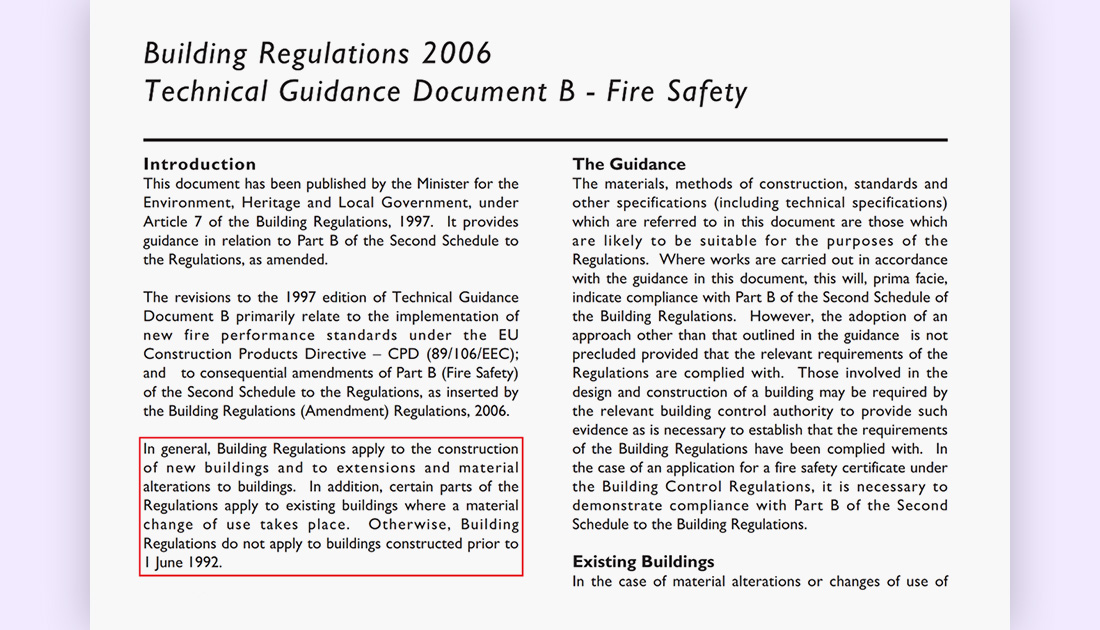 The Fire Services Acts 1981 & 2003 places a legal obligation on landlords to:

Eoghan Murphy, Minister for housing, Planning & Local Government speaking in the Seanad in May 2019 said:

Historic buildings predate, in some cases by centuries, the introduction of building regulations, which do not create retrospective requirements on existing buildings. These buildings will generally attract the requirements of the Fire Services Acts 1981 and 2003. Broadly paraphrasing, this places obligations on those having control over a building to guard against the outbreak of fire and make provision for the safety of people in the event of fire.

Those deemed to “have control over a building” are its owners which in the case of a multi-unit-development is the OMC (Owners’ Management Company).

In addition to the above, The Housing (Standards for Rented Housing) Regulations 2017 which were introduced on 1st July 2017 prescribe a landlord’s responsibility in relation to fire as follows:

What is a Fire Safety Certificate?

A Fire Safety Certificate is a certificate issued by the Building Control Authority on foot of an application submitted to it. A Fire Safety Certificate certifies that the works or building to which the application relates will, if constructed in accordance with the plans and specifications submitted, comply with the requirements of Part B [Fire] of the Second Schedule to the Building Regulations 1997. Note that no actual onsite follow up inspection takes place as a matter of course; the awarding of a certificate is a desk-based exercise based on information supplied by the applicant. The existence of a fire safety certificate simply means that the building design complies with regulations; it doesn’t mean that the actual building complies.

The following developments built after 1st August 1992 (other than those listed as exempt below) require a Fire Safety Certificate;

Which Developments are Exempted from the Requirement of a Fire Safety Certificate?

The following buildings are exempted from the requirement to obtain a Fire Safety Certificate:

As mentioned above, a building constructed prior to ’92 won’t have a fire certificate unless material alterations were carried out since then and one was applied for and granted as part of carrying out these alterations. The fact that a building doesn’t have a fire certificate, as mentioned above, doesn’t condemn the building to a state of incompliance. A landlord can hire an assessor to carry out a site survey to advise of whether or not the building complies with the standards with which it is obliged to comply. Again, it is worth mentioning that buildings built prior to ’92 do not need to comply with building regulations but will need to meet other minimum standards. The assessor may list a number of measures that would need to be taken in order to bring the building into a compliant state. Once done, the assessor can issue an opinion of compliance which basically states that even though the assessor didn’t oversee the construction of this building, (s)he is happy to certify that in their opinion the building is compliant with all the requirements with which it is obliged to comply. This is a very important point as banks won’t take an incompliant building as security ie they won’t issue a mortgage on such a building. A building that isn’t “bankable” can only be sold to a cash buyer and as such its value is diminished. Accordingly, if selling a property, investing in the building to ensure it is compliant & paying an assessor to confirm this may well be a sound investment. By being able to demonstrate that the building is compliant, it should then become bankable as so, more valuable.

Book Free Valuation with one of our Experienced Estate Agents