Housing for All Analysis

Property prices in Ireland rose dramatically in the lead up to the bubble bursting in 2008. Frenzied speculation and construction drove prices to unsustainable levels; it took six years from when prices started to fall for them to bottom out in late 2013, early 2014. During this period, property prices fell by over 50% causing financial ruin for thousands. The backlash against property developers and speculators was fierce as they were deemed to have been most responsible for the collapse.

The billions of Euro in loans that they owed were transferred from the original lenders to a State owned “bad bank” called NAMA. NAMA took an unforgiving approach with developers often forcing them to declare bankruptcy by selling off assets at the bottom of the market. The construction sector was decimated and residential property output fell from a high of over 90,000 units in 2006 to below 10,000 in 2013. Countless developers & contractors of all sizes went out of business and there was an exodus of construction workers from the country. Ghost estates dotted the country; the property market was in tatters as was the wider economy. However, gradually the economy recovered and has now roared back stronger than ever before. However, the construction industry and residential output failed hopelessly to keep pace with this growth; the damage inflicted on the industry was massive and it was not able to respond to the growth in demand as it started to return. Once bitten, twice shy banks were slow to lend and development expertise and/or developers of scale were few and far between having been driven out of business during the bust. The net result is a depleted housing stock hopelessly inadequate to serve the needs of a population that has swelled to over five million people.

What is Housing for All?

“Everyone in the State should have access to a home to purchase or rent at an affordable price, built to a high standard and in the right place, offering a high quality of life.”

Housing For All is the Government’s plan to finally, once and for all, deal with Ireland’s housing crisis.

The Government’s HNDA (Housing Need Demand Assessment) predicts that the country will need circa 32,700 units per annum, every year to 2030. The plan is to ensure that at least this amount of units are actually produced.

What has the Government Done Already?

While Housing For All is the latest plan to tackle the housing crisis in Ireland, much substantial work has already been done.

The Government has scrapped the previous rules that permitted 4% rent rises annually and replaced with a system whereby rents can only increase in line with inflation as measured by the Harmonised Index of Consumer Prices (HICP).

While it has been prohibited to use a property for short term rentals for more than 90 days per annum without the requisite planning permission, most landlords have carried on with the lucrative practice regardless. Increased resources have been given to Local Councils to put an end to this practice. The goal is to return the vast bulk of accommodation lost to short-term rentals back to the long term rental pool.

A fund buying more than 10 residential properties per annum will now incur 10% stamp duty. Controversially, this measure was tweaked not to include properties being purchased to rent back to Local Councils. This highlights the power of lobbying as no one in Government is in favour of the economically illogical practice of Local Councils renting properties in long term, expensive rents, but yet the legislation was changed.

This extremely generous scheme gives first time buyers up to €30,000 back as a tax rebate towards the purchase price of a new property. In addition to this, the Shared Equity Scheme is due to come onstream shortly which will give FTB’ers a low cost equity loan to help them fund the purchase. The Government is bending over backwards to get first buyers “on the ladder”.

The LDA is charged with identifying public land banks suitable for residential construction. Once identified, it liaises with various stakeholders, including private sector companies, to attain planning and ultimately build on the land. The recent resignation of its CEO is a blow for the agency but the concept of a centralised agency identifying inefficient uses of public land and well-resourced to build housing on this land makes sense and will ultimately be proven to have been a good and effective idea. 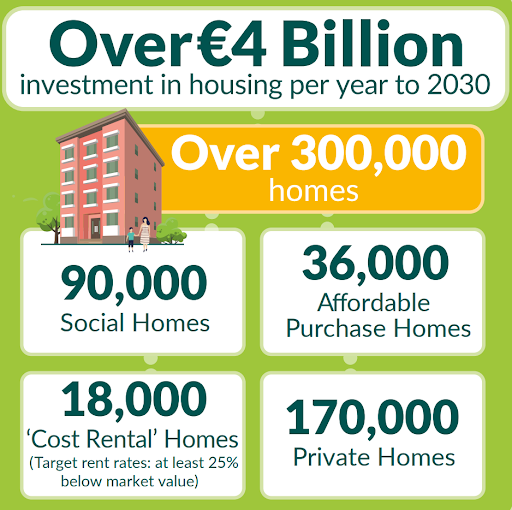 There are 4 Pillars to the plan. 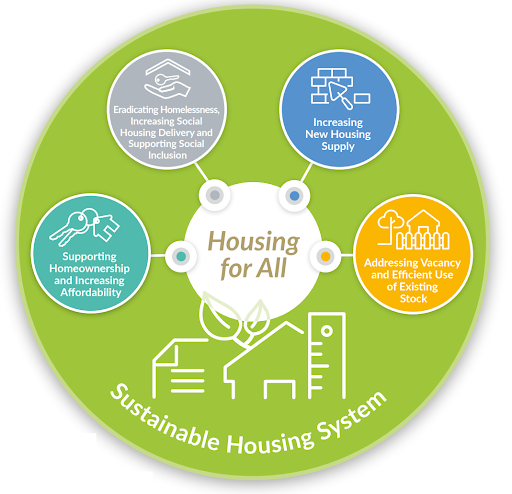 The Government seems to have accepted that, let to its own devices, the private construction sector will not deliver affordable homes. Rather, it will deliver expensive homes to the minority of people who can afford them. Accordingly, it intends to become a far more active participant in home-building than ever before. This will be achieved through Local Authorities and the LDA.

The plan acknowledges that there is far more to homelessness than the lack of a home. Homeless people typically have complex health and addiction issues that need to be tackled in parallel to the provision of housing. The plan further acknowledges that regardless of the definition of “affordable” adopted, certain segments of society will never be able to purchase a property but rather need to be given one by the State. Ireland seems to be moving far closer to Berlin than Boston in its approach to the housing market.

Dramatically increased supply is required to solve the housing crisis. The plan looks to schemes like Help to Buy & the Shared Equity Scheme to bolster the buying power of first time buyers with the thinking being that private construction companies will expand their operations and activate previously unviable planning permissions to take advantage of this new cashed up group of buyers. As mentioned previously, the Government seems to have finally acknowledged that supply will not be sufficient if full reliance is placed on the market to deliver the same. Hence the State plans to roll up its own sleeves and become a supplier of new properties on a scale never seen before in Ireland.

“At a time when we face a housing supply shortage, many homes around the country lie vacant.”

It seems incredible that with rents so high and in the midst of an acute housing shortage, there are almost 100,000 vacant properties in the State. Notwithstanding the fact that some of these are in the “wrong” locations, many are not and the Government is determined to maximise this low-hanging fruit by bringing these properties back into use. It is doing this with a carrot and stick approach. The stick will be a more punitive vacant property tax that will make owning a property that is lying idle an expensive endeavour. The idea is that the owner will then either sell it or invest in it and rent it out to the market.

In terms of the carrot, the Repair & Lease Scheme has had its maximum repair value increased to €60,000 up from €40,000. This Scheme involves the Local Authority or Approved Housing Board paying upfront for the cost of upgrading a vacant property to an acceptable standard to accommodate tenants. Once the refurbishment work is completed, the Council or AHB will rent the property from the owner and gradually net off the costs of the refurbishment from the rental payments over time. So the landlord ultimately does pay for the works but doesn’t have to come up with the cash to fund them upfront. This is a progressive idea and increasing the threshold from €40,000 to €60,000 is yet another indication as to how seriously the Government wants to tackle the housing crisis.

There appears to be genuine political will from all parties to finally deal with Ireland’s housing issues. Fianna Fáil, Fine Gael & the Greens understand that if this issue isn’t solved or well on its way to being solved, they will not be forgiven by the electorate at the next election. Assuming that the election is in 2025, that gives the current Government just under four years before they will have to put their progress before the people to judge. If substantial progress hasn’t been made, the prospect of Sinn Féin leading the next Government is a very real one and the current parties of Government know this. It is in their own self-interests to have delivered on the goals set out in Housing for All as their political careers depend on so doing; there is no stronger incentive for a politician than self-preservation!

So the political will is there for sure. The next question is whether the resources are. The answer here seems to be that yes there will be sufficient financial muscle to implement the commitments made. So long as the economy continues to perform as it has done and crucially that there is no major disruption to corporation tax on which Ireland is so heavily dependent, then the money should be available. Political will plus plentiful resources is a potent combination and on the issue of housing, we appear now to have both.

Some stumbling blocks however may be the labour force & construction cost inflation. As the Government puts it in the plan:

“The Government recognises that there are a number of risks with increasing funding so significantly. The construction sector may not currently have the capacity to realise spending demands efficiently.

Taking account of these trends, there is an obvious danger that the effects of significantly increased Government funding for housing may be diminished by rising construction and house price inflation. However, the answer is not to cut back spending but to aggressively tackle constraints on the supply of homes as well as keeping overall levels of spending under careful review to ensure value for money.”

The Government estimates that an additional 27,500 workers will be required to deliver on the targets. This will be achieved through attracting new entrants to the market owing to plentiful work & attractive remuneration as well as drawing on international labour markets to supplement our domestic supply if that can’t meet the demand. Construction price inflation hopefully will be mitigated by strong competition among contractors for large projects albeit there certainly is a risk that we’ll end up doing less with more owing to ever spiralling construction costs.

The roadmap may not be perfect; it will not always go to plan but it is a bold and determined statement of intent on behalf of the Government that they want to solve the housing issue in Ireland once and for all. There are many in Irish politics who have dismissed this plan before it was even launched and one gets the feeling they hope desperately that it will fail as that is in their political interests. However, everyone else in Ireland should be wishing the Government and all those involved a fair wind.